Fletcher referred to India's unbeaten run during the 2013 ICC Champions Trophy in England as signs of the team's capability to do well overseas.

India’s coach Duncan Fletcher believes that team India can defend their World Cup title in Australia and New Zealand. He feels that the team have the rare ability to chase down big totals and also referred to India’s unbeaten run during the 2013 ICC Champions Trophy in England as signs of the team’s capability to do well overseas.

In an interview to BCCI.TV, Fletcher also said, “A big reason for my belief is our Champions Trophy (2013) victory in England. We played in very foreign conditions that didn’t suit the side and yet we played so well that we didn’t lose a single match. That shows that the side is used to winning and that’s really exciting.”

This will be Fletcher’s third World Cup as a coach and the Zimbabwean is happy with how the team has built over the last few years.

“I am very excited, especially given the side we have. I think we are a good chance to win after the way the team has been building over the last three-four years,” the 66 year-old added. 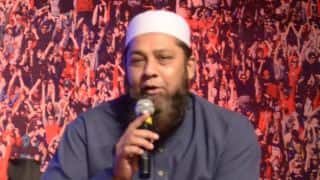