The first One-Day International (ODI) between Australia and India at WACA drew enormous attention and old memories were rekindled when the smiling assassin George Bailey donned the yellow wide-brimmed floppy hat. It soon became a trend in the Australian cricket fraternity as many contemporary cricketers along with former greats were seen joining the bandwagon. Also Read: George Bailey s floppy hat makes heads turn at the WACA; sets Twitter abuzz

Bailey was admired for his special appearance as the old fashioned round hat has become rare in contemporary cricket. The trend was rightly followed by David Warner, Mitchell Marsh, Steve Smith, Darrne Lehmann and Rod Marsh. Also Read: George Bailey talks about his much talked about yellow wide-brimmed floppy hat

Glenn Maxwell posted pictures of Smith on Instagram account with captions which read, How good does the skipper look in his custom made yellow floppy??#smalllid #skipper #followgeorge#thefisherman @steve_smith49

David Warner who is on a paternity leave also clicked a selfie with the hat and with newly born daughter Indi Rae Warner and took it to his Instagram account.

Mitchell Marsh too posted a picture with skipper Smith while donning the hat and posted it on his Twiitter account.

Australia have done a remarkable job in the ODI series so far as they are now leading the series by 2-0 and another win on Sunday will seal the series for them. As of now, all eyes are set on Melbourne as the pivotal game is all set to kick start on Sunday. 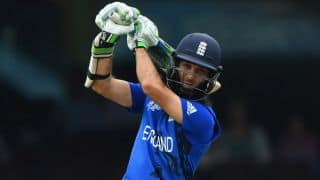