The 44-year old, Brad Hogg played his first match for KKR and combined brilliantly with Piyush Chawla, Andre Russell and Pat Cummins to restrict CSK to 134.

Kolkata Knight Riders (KKR) will be rueing this loss. They did everything right for almost three fourth of the match but ended up in the losing side and that too agonisingly by two runs. A sluggish wicket, some good spin bowling, brilliant fielding and lack of application of common sense did the KKR side.

When KKR were 52 for one in five overs, even the most optimist of Chennai Super Kings (CSK) fans might have had lost hopes, but CSK have been the best Twenty20 side for a reason. CSK are good with converting half chances. The spinners and Dwayne Bravo pulled it off and they were backed by some dream fielding. True, that the KKR batsmen fell victims to some suicidal batting and running, but it was the brilliant CSK fielding that caused the most.

The 44-year old, Brad Hogg played his first match for KKR and combined brilliantly with Piyush Chawla, Andre Russell and Pat Cummins to restrict CSK to 134. Brendon McCullum and Dwayne Smith, once again started well at the top but the batting saw a slide after McCullum was dismissed in the fifth over with 42 on the board.

Turning points: Andre Russell’s run out in the 17th over was a big blow to KKR. He was a man who could pull it off. Also with 17 required from the last six balls, Bravo was trusted with the ball. But with Ryan ten Doeschate on strike, you back him to do the impossible. Bravo bowled three dot balls and that turned it in CSK’s way. Ten Doeschate, one of the best limited overs cricketers, plundered 14 from the next three, but that was still two less of CSK’s total.

With this win, CSK now move to the top of the table, while KKR with three wins and three loses, remain at the third spot. 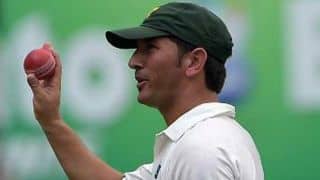