De Villiers has an uncanny knack of snatching improbable victories from the imminent jaws of defeat and he looked dangerous from the outset.

‘Catches win matches’ is a clich that holds very true. Everyone knows how a good catch can turn the game on its head; Chennai Super Kings (CSK) did exactly the same thing while fielding to ensure that they didn’t let the game drift away. The likes of Brendon McCullum, Dwayne Bravo, Suresh Raina, Ravindra Jadeja and Faf Du Plessis render fielding a joy to behold.

After a disheartening defeat against Rajasthan Royals (RR) in their previous encounter, CSK had their hopes pinned on this game to gain momentum and move up in the points table and eventually it did happen. RCB won the toss and fielded first. Once again their bowlers leaked runs, except Mitchell Starc and Harshal Patel all the bowlers were under the pump. CSK lost McCullum very early but Raina and Dwayne Smith stuck to their guns and got the ball rolling from the outset at Bangalore. Somehow, CSK managed to get 181 in their 20 overs. Raina rediscovered his form and once again showed why he is one of the most destructive players in the IPL. He bounced back emphatically to score a half century that made the difference.

RCB got a good start but failed to capitalise on it, courtesy to some brilliant catches taken by the CSK fielders. RCB were 31 for 0 at the end of third over when Faf Du Plessis took a stunning catch at mid-off to send Manvinder Bisla back to the pavilion, who mistimed a straight loft off Ashish Nehra which almost went over du Plessis. Just when the RCB’s nerves seemed to be settling, Bravo pulled out an absolute stunner at long on to get rid of Dinesh Karthik. RCB were 61 for two at the end of eighth over when Karthik lost his wicket. AB de Villiers was too a victim of some brilliant presence of mind on the field. RCB never recovered after the loss of De Villiers. Had they capitalised on the start, the story would have been different.

Turning point: The turning point indubitably was the run out of AB de Villiers, in the 12th over. De Villiers has an uncanny knack of snatching improbable victories from the imminent jaws of defeat and he looked dangerous from the outset. He was steadily building a platform with Virat Kohli. In a rush of blood perhaps, de Villiers called for a two when Kohli hit one through the covers. Dwayne Smith, who was fielding in the deep got the throw right into the hands of Mahendra Singh Dhoni, who skillfully flicked it on to the stumps and ensured that the South African great didn’t make his ground. After the de Villiers’ dismissal, RCB never got back into the game. 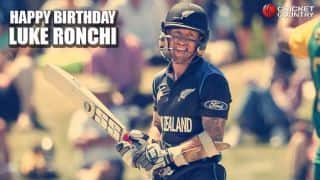