Seven years back, Brendon McCullum welcomed Indian Premier League (IPL) in a grand fashion when playing for Kolkata Knight Riders (KKR), he blasted that hundred against Royal Challengers Bangalore (RCB). On Saturday, he scored his second IPL hundred, another brutal knock to ensure two wins on a trot for Chennai Super Kings (CSK).

McCullum blasted an unbeaten 100 from 56 balls, in a knock that contained seven boundaries and nine sixes. He was well supported by the side’s skipper MS Dhoni, who promoted himself in the batting order and struck 53 from 29 balls. CSK who struggled with the bat in the same venue two nights back, made amends for it and posted 209 from 20 overs.

Turning point: SRH boasts of a strong bowling attack and a lot was expected out of Ishant Sharma, who was making his comeback. Ishant bowled four no-balls, which is a sin in this format and the seventh over went for 16 runs, giving CSK the upper hand. CSK further gained the momentum, when McCullum blasted him in the 12th over, with the bowler going for 23 this time.

For SRH, the chase wasn’t going to be easy and they struggled against the CSK bowling. Skipper Warner scored a fifty but as the asking rate went up, the batters in pursuit of quick runs gave away wickets easily. In the end it was a comfortable win for CSK, as they now move at the top of the table, a position they are quite familiar with. 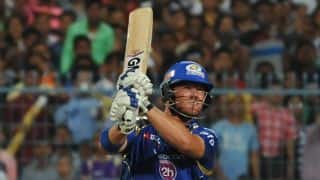