But it was Shreyas Iyer's fantastic knock of 70 not out from 49 balls which ensured a DD win.

Delhi Daredevils (DD) earned some pride by defeating table-toppers Chennai Super Kings (CSK) in the Indian Premier League (IPL) at Raipur on Tuesday. DD are already out of the tournament but they managed to disrupt CSK’s winning momentum.

CSK won the toss elected to bat first. Brendon McCullum and Dwayne Smith struggled to get runs as Zaheer Khan and Shabaaz Nadeem began brilliantly with the ball. It was a patchy start given by the openers and soon McCullum threw his wicket to Zaheer. After six overs, CSK were 16 for one. Thereafter, the innings never got a boost though MS Dhoni and Faf du Plessis got some momentum in the middle. DD bowlers maintained an accurate length which ensured that they chase a total of no more than 120.

While chasing a paltry total of 120, DD didn’t get off to a good start as they lost Quinton de Kock early. JP Duminy followed him soon and CSK saw some glimmer of hope. But it was Shreyas Iyer’s fantastic knock of 70 not out from 49 balls which ensured a DD win. Yuvraj Singh played his part in the middle and assisted him well with 32 off 28 deliveries.

Turning point: With two overs left and Dhoni in the crease, CSK hoped for a total par 145. But the 19th over from Zaheer conceded only 4 runs and he got the dangerous wicket of the CSK skipper. The responsibility for the final over was given to Gurinder Sandhu and he came back strongly by giving only five runs. The game witnessed Zaheer guiding Sandhu after each ball bowled by the latter. 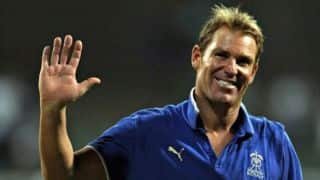 Shane Warne takes a dig at Andrew Strauss and ECB