In the end the difference between the two evenly matched sides was the best batsman in the Indian Premier League (IPL) history.

In the end the difference between the two evenly matched sides was the best batsman in the Indian Premier League (IPL) history. Chris Gayle certainly is the best and once again proved that with a herculean effort of 96 from 56 balls, that saw his side Royal Challengers Bangalore (RCB) win the match by three wickets and an over spare.

Kolkata Knight Riders (KKR) learned a basic lesson that if you keep dropping catches of one of the best in the business, he will make you pay and the dropped catches hurt them badly. Not that they RCB didn’t, they too dropped catches, misfielded and aided KKR in getting 177 in their 20 overs. Winning the toss, RCB skipper Virat Kohli invited KKR to bat and the latter began well with both, Gautam Gambhir and Robin Uthappa attacking. Gambhir got to his second consecutive fifty and he was helped by a dropped catch from AB de Villiers. It was a dolly that the South African champion missed much to everyone’s surprise. The innings received a boost towards the end with Andre Russell blazing guns and scoring an unbeaten of 41 from 17.

For RCB, at one end they kept losing wickets and at the other Gayle kept on attacking. They had a productive period from the eighth to 11th over, when 37 came from three overs. De Villiers played a cameo of 28 from 13, which boosted the momentum. There was much talked about mystery about KC Cariappa’s bowling but unfortunately the young man was up against the very best. De Villiers was severe on him, but there was some relief in the end for the 20-year-old, who got the prized wicket too.

Turning moment: Morkel dropped a catch that should have been taken. De Villiers’ wicket fell in the last ball of the 11th over and in the very next ball (first of the 12th over); Gayle was dropped at deep square-leg by Morkel. A batsman like Gayle can’t be dropped thrice in an innings.

Gayle went on hitting and RCB received some scare when he got run out courtesy a brilliant piece of fielding from Manish Pandey. However, Harshal Patel and Abu Nechim kept their calm and saw them home with an over to spare. 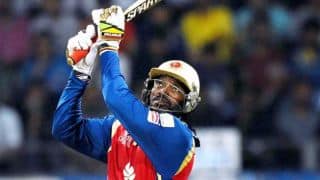