The new franchises were chosen through a reverse bidding process, in which the New Rising bid Rs minus 16 crore while Intex quoted minus 10 crore to get the ownership

Pune and Rajkot have been declared as venues of two new franchises in the Indian Premier League (IPL) season nine after the Sanjeev Goenka-owned New Rising consortium and mobile phone manufacturer Intex won their ownership rights. New Rising will have Pune as their home base, while Intex have opted for Rajkot.

The new franchises were chosen through a reverse bidding process, in which the New Rising bid Rs minus 16 crore while Intex quoted minus 10 crore to get the ownership. The two new teams had to be added the since the RM Lodha-led panel had earlier suspended Chennai Super Kings (CSK) and Rajasthan Royals (RR) for two years in relation to the 2013 IPL corruption scandal.

The new franchises will now take part in a player draft on December 15, where both teams will pick five players each from a pool of CSK and RR players. Ever since the news of two new franchises broke out, #IPL2016 and #Rajkot started trending on Twitter. The twitterati showed keen interest in the proceedings and came up with both congratulatory as well as witty tweets. We bring to you some top tweets under the trend here:

Welcome #Pune and #Rajkot to the @IPL family, see you in the Cricket pitch! https://t.co/8ufr8Eosov

Rajkot is selected as a new team #IPL2016–WelcomeToGujarat Very glad to hear that Thanks @BCCI @IntexBrand for this golden opportunity Sagar Patel (@patel_sagar_101) December 8, 2015

#Rajkot team makes sense but please no Pune team in IPL. We don’t want to see cheerleaders in saree like last time.

People of #Rajkot are happy because they will get to see Cheerleaders up, close and personal. Who cares about the #IPL team, bhai. He-Man’s Shoe! (@hparmekar) December 8, 2015

After playing for @rajasthanroyals, Kochi Tuskers and @ChennaiIPL, @imjadeja could finally play for his real home team! #Rajkot 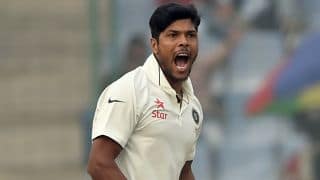 IPL 2016 new teams: Why Pune will bid first and not Rajkot