Naushad Khan, father of Sarfaraz and also a coach, was gleaming with happiness after his son's debut and was delighted with the fact that a lot of Indian national players were present when his son was batting.

The inception of the cash-laden Indian Premier League (IPL) has benefited a lot of youth products all over the world, especially the Indians to showcase their talent. The IPL has provided a base for all the teenage prodigies and has become a chartbuster event since its inaugural edition.

Among the lot, Mumbai’s 17-year old sensation, named Sarfaraz Khan from Mumbai was drafted in the Royal Challengers Bangalore (RCB) side in the 2015 IPL auctions. Sarfaraz became the youngest player to play in the IPL, making his family and nation proud. Though Sarfaraz scored only 11 runs off seven deliveries, he looked promising, who with further nurturing can become a great player.

Naushad Khan, father of Sarfaraz and also a coach, was gleaming with happiness after his son’s debut and was delighted with the fact that a lot of Indian national players were present when his son was batting.

“What can I say? It was my dream to see him play big-ticket cricket. The IPL is the most popular cricket tournament in the world. And my son was out there playing with such world-class players. Come to think of it, when Sarfaraz came out to bat, MS Dhoni was behind the stumps, Virat Kohli was standing at the non-striker’s end and Ravindra Jadeja was the bowler,” Naushad was quoted in a report from RCB’s official website.

Naushad also stated the excitement his son had after witnessing over 52 messages, 226 friend requests and 85 notifications in a few hours after his debut.

“My son adores AB de Villiers,” added Naushad, who has been a mentor from scratch which has helped his son plunder heaps of runs at the ‘maidans’ of Mumbai. He represented the India U-19 team at the age of 15 and scored a breathtaking 439 in Harris Shield (a record then) in and became a sensation.

“It’s been a long journey. But this seems just the beginning now,” Naushad concluded.

It is just the beginning of the young prodigy’s cricketing career and hope Sarfaraz makes India proud with his noteworthy talent. 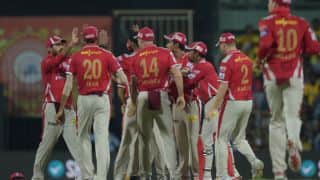