It was a dream come true for young Shai Hope, when he was included in the West Indies team.

When Jason Holder was appointed the West Indies One Day International (ODI) skipper ahead of the World Cup 2015, it raised many eyebrows. But the youngster led the side to the quarter-final of the tournament and has gradually evolved as a good leader, who hasn’t failed to encourage newcomers in the die.

It was a dream come true for young Shai Hope, when he was included in the West Indies team. But it was more delight for Hope, when he was presented his first Test cap by legendary West Indian cricketer Clive Lloyd. West Indies ODI skipper Holder posted a picture of Hope receiving the cap from Lloyd, on his official Instagram account, wishing him all the very best for his cricketing career.

The 21-year old batsman made it to the Test squad following 211 for Barbados against Windward Islands last season. 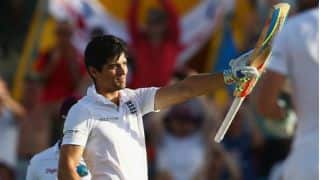