Ever since N Srinivasan's son-in-law, Gurunath Meiyappan's name has cropped up during the investigations, there have been calls for termination of Chennai Super Kings (CSK).

It’s Judgment Day for N Srinivasan and the Board of Control for Cricket in India (BCCI), as the special bench of the Supreme Court (SC), comprising Justices TS Thakur and FM Ibrahim Kalifullah, will deliver the verdict in the IPL betting and spot-fixing on Thursday.

Ever since N Srinivasan’s son-in-law, Gurunath Meiyappan’s name has cropped up during the investigations, there have been calls for termination of Chennai Super Kings (CSK).

As reported by DNA, an unfavourable verdict could render the position of Srinivasan and IPL chief operating officer Sundar Raman in the BCCI untenable. There bench has made some crucial observations and such a verdict is very likely.

Srinivasan has maintained that he is “innocent” and that he has nothing to do with his son-in-law’s involvement. The SC has repeatedly reminded him “you are not just the owner of CSK, but by being the highest-ranking official in the game (BCCI and ICC), it is your duty to keep the integrity of the game intact”.

The case dates back to June 2013 when Aditya Verma, secretary of the Cricket Association of Bihar (CAB), raised charges of a conflict of interest in the BCCI’s original two-member inquiry panel for the IPL corruption issue. Bombay High Court later termed the probe panel “illegal”. The BCCI and the CAB filed petitions in the SC against this order.

Also Srinvasan’s ‘conflict of interest’ has been questioned by the bench. In December last year, Srinivasan tried to argue that if he is punished in the conflict of interest matter, then it may ruin the careers of cricketing legends like Sunil Gavaskar, Ravi Shastri, Anil Kumble and Sourav Ganguly among others, who have been earning money from various sources.

The case has been listed for 2pm. 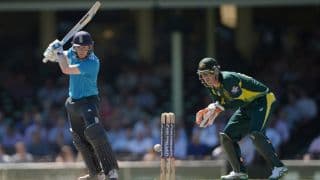