Catch the live action of 5th ODI between England and Sri Lanka here:

The fifth One-Day International (ODI) of the series between England and Sri Lanka will be played at Cardiff on Saturday. Though it s a dead rubber as the hosts England have already won the series by 2-0, with two matches being drawn because of rain, the match is still expected to be exciting given the way series has panned out so far.

England are currently playing at their best, be it their bowling or batting. Both their departments have done exceedingly well throughout the series. On the other hand, Sri Lanka will be looking to win this final encounter and end the series on a positive note. Their batting seems to have improved as their middle order batsmen other than captain Angelo Mathews and wicketkeeper Dinesh Chandimal too have scored runs. All they need is to improve their bowling and they can hope for a win.

Well, expect an exciting game between both these sides. You can catch the live action of the game on Star Sports and below. 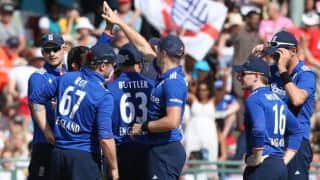