Catch the live action of the 20th match of ICC World T20 2016 between South Africa and Afghanistan here.

The 20th game of the ICC World T20 2016 will be played between South Africa and Afghanistan at Mumbai on Sunday. Both the teams have endured similar results in their previous encounter as both of them lost their respective games. While South Africa suffered a tragic defeat at the hands of England after posting a gigantic 229 on the board, Afghanistan lost the battle to Sri Lanka.

This game holds a lot of importance for both the teams as a win here will keep their hopes alive of making it to the knock-out stages of the tournament. South Africa have a well seasoned side with the likes of AB de Villiers, Faf du Plessis, David Miller, JP Duminy, Quinton de Koock and Dale Staeyn in the side. They are clearly the favourites going into the tournament and will give their best shot to win this game.

Afghanistan on the other hand, have drilled hard to reserve a berth in the Super 10s and lost their first game to Sri Lanka by a whisker. They have a decent side and can well create an upset. The likes of Mohammad Shahzad, Asghar Stanikzai, Mohammad Nabi and Dalat Zadran inspire confidence. The match will start at 3 pm Indian Standard Time (IST) and will be telecast live. Catch the live action as we bring to you the link for the live streaming here. 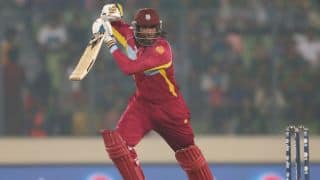