An elegant left-handed genius, Ganguly s prowess on the off-side was praised across the globe.

Former Indian skipper Sourav Ganguly, who turned 44 today, is widely reckoned as Dada in the cricketing circles of India. One wouldn t be wrong in saying that the southpaw changed the face of Indian cricket. He is acknowledged as one of the most successful Indian skippers with numerous records to his name throughout his sky-high career. READ MORE: Sourav Ganguly: 24 mindboggling stats about one of India’s greatest captains

Ganguly led the Indian side successfully to the final of the 2003 World Cup but lost the ultimate battle to Australia. An elegant left-handed genius, Ganguly s prowess on the off-side was praised across the globe. On the contrary, he was also a handy medium pacer and chipped in with crucial wickets on several occasions. READ MORE: Virender Sehwag sends birthday wishes to Sourav Ganguly in his inimitable style

Ganguly has amassed massive runs across formats; he represented India in 113 Tests and 311 One-Day Internationals (ODIs) and scored 7,212 and 11,363 runs respectively. Ganguly also represented Kolkata Knight Riders (KKR) and Pune Warriors India (PWI) in the Indian Premier League (IPL). Here are some select birthday wishes from luminaries that came his way on Twitter:

Many many happy returns of the day, Dada. Your advice over the years has been a major factor in my success. (1/2) pic.twitter.com/UCAakd3rGU Manoj Tiwary (@tiwarymanoj) July 8, 2016

You been an inspirational for me. Thanks for everything @SGanguly99. Wish u lots of happiness & success in the year ahead #HappyBirthdayDada

Birthday greetings to @SGanguly99 Wish you all the success and happiness in life Mamata Banerjee (@MamataOfficial) July 8, 2016

Happy Birthday Dada! No captain has played a bigger role in my career than @SGanguly99. Wishing him a long life. pic.twitter.com/dwGeXaYMts

Happy birthday @SGanguly99! May the almighty shower lots of love and blessings!

@SGanguly99 Many more happy returns of the day Dada, please continue to inspire us as always. Ashwin Ravichandran (@ashwinravi99) July 8, 2016

HappyBirthdayDada @SGanguly99. May you keep on helping India wave our flag high,just like u waved ur shirt at Lords pic.twitter.com/2ohxDlIKT5

A very happy birthday to you Dada. Hope you have a great year ahead. @SGanguly99 pic.twitter.com/1P6Zk1Wgkh

A lot of you have mentioned that 2002 NatWest final – here it is & yes, it includes that @SGanguly99 celebration!https://t.co/skkWDrvptX 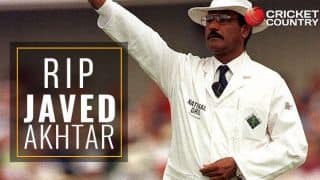