Even MS Dhoni, one of cricket's most celebrated leaders, was praised for the way he analysed a situation and the results were well seen.

The recently concluded ICC Cricket World Cup 2015 saw exceptional batting, bowling and fielding. One factor that mastered the above all was on-field leadership and there were some exemplary ones. The cricketing world hailed New Zealand skipper Brendon McCullum’s aggressive style of captaincy while Australia’s Michael Clarke attacking and tactical acumen was lauded too, as he ended up lifting the cup.

Even MS Dhoni, one of cricket’s most celebrated leaders, was praised for the way he analysed a situation and the results were well seen. India topped the Pool B and remained unbeaten till semi-final. Former Australian batsman Mike Hussey, who is now Dhoni’s teammate at Chennai Super Kings (CSK) compared Dhoni’s leadership style to Clarke and McCullum and called the former “calmest”. The southpaw also said he would love to have the Indian skipper’s “equanimity at the end of the innings”.

After a season with Mumbai Indians (MI), Hussey is set to reunite with CSK for the eighth edition of the Indian Premiere League (IPL). The left-hander said, “I would like his power. I would love to have his equanimity at the end of the innings. Sometimes, it might look that I have it but I’ll tell you right now that I don’t. MS is just fantastic to bat with at the end of the innings because he is so cool and he has got it all planned out,” Hussey was quoted in a report from Press Trust of India (PTI).

“He knows exactly what needs to be done to win the game. In a similar situation, I tend to panic a lot, wanting to get it done with as quickly as possible. He is very methodical in breaking down the target into fractions and playing the situation,” the Australian veteran further added.

Hussey, who too is considered one of the best finishers, admitted that there are times when he himself gets nervous about the run-rate, but Dhoni remains confident. He said, “While I sometimes get nervous thinking, ‘Oh we’re falling behind the rate’, he is very positive all the time saying, ‘No need to worry, we are right on target’ very assured and very confident throughout.”

After being asked to compare the captaincy of Dhoni, Clarke and McCullum in the recently concluded mega event, Hussey said that the Indian was the calmest and composed of all.

“Dhoni is probably the calmest of the lot. He doesn’t get too flustered and thinks very clearly under pressure. He was backed up magnificently by his bowlers. Sometimes that’s what captaincy comes down to you look like a good or bad captain depending on how your players respond,” the 39-year old concluded.

CSK will play their opening game in their home ground Chidambaram Stadium against Delhi Daredevils on Thursday and Hussey will be raring to make a mark again with the men in yellow after having an off-season with Mumbai Indians in previous year. 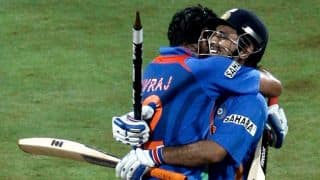 Dream Team: An IPL XI based on past IPL performances