The commentators immediately compared that with South Africa's Herschelle Gibbs' one, who took the catch of the then Australian captain Steve Waugh at mid-wicket but dropped it while trying to throw the ball in the air to celebrate.

Indian pacer Umesh Yadav is currently facing some tough time in the ongoing first Test against England at Rajkot. Not only in this Test, since his debut, he has never been the permanent member in the side and has struggled in cementing his place. Despite all those things, Yadav plucked an excellent catch on day one of the Test, which was of England batsman Joe Root. That was not just a normal catch for him but infact it was quite difficult one as he took that catch during his follow through after releasing the ball. The catch attracted lot of attention as Yadav fumbled while taking it as he even tried to throw the ball in the air to celebrate. Full Cricket Scorecard: India vs England 1st Test at Rajkot

While taking that catch, the ball slipped from Yadav’s hand and since he took that in front of umpire Dharmasena, the decision was referred to third umpire. It was the 81st over of the day at Rajkot, when the catch was taken by Yadav and Root was batting at 124. The commentators immediately compared that with South Africa’s Herschelle Gibbs‘ one, who took the catch of the then Australian captain Steve Waugh at mid-wicket but dropped it while trying to throw the ball in the air to celebrate in the 1999 World Cup group stage game.

Reacting to this, as reported by Mid-Day, Gibbs said that his was much quicker. ” Mine happened quicker than Yadav,” Gibbs said after watching Yadav’s catch and added, “There’s not much difference between Yadav’s and my catch, but he held on to the ball slightly longer than I did. He actually had control of the ball and threw it in the air whereas I wanted to throw it up but dropped it. Mine eventuated in a not out, but Yadav’s catch was valid. The umpires got it right both times.”

After the match, Root, who was the batsman to get out through that catch said, I was just disgusted with the shot… Having seen the slow-mo replay, it does look out but when you speed it up it looks a bit strange. But at the end of the day, I was really lucky with an umpire s call with an lbw earlier on (on 93). We have to take the rough with the smooth sometimes and just get on with it.

After all the analysis and looking from every angle, Yadav’s was surely in much more control than Gibbs’. Root was the only wicket which Yadav scalped in the first innings and he must thank his quick reaction for that. 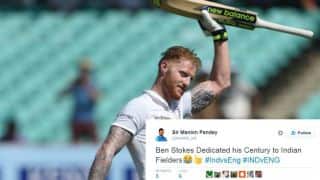