On this occasion, we present 14 quotes by famous personalities from cricket fraternity, on who said what on Amir's Test comeback.

It seems a complete circle for Mohammad Amir. The left-armer is set to make Test comeback and the venue is Lord’s, the very crime scene, where he committed a sin six years back and did not play a Test every since.

In 2010, Amir, who was still a teenager, proved to be lethal against England. He finished with 19 wickets at 18.36. Despite the highs, his greed pulled him down. Amir bowled deliberate no-balls on instructions of his captain Salman Butt. The spot-fixing allegations were proved and Amir, Butt and Mohammad Asif were banned.

Still, 18 and bowling brilliantly, Amir not only stayed out of the game for five years but had also spent time in Portland Young Offenders Institution in Dorset. With the ban lifted, Amir proved himself consistently in the domestic circuit before staging a national comeback.

In January 2016, Amir donned the Pakistan greens again and today, he is all set to make his Test debut at Lord’s, the home of cricket and the very ground where he brought disgrace to the game. he has shown his prowess in the shorter formats and now to the big stage.

While many current and former cricketers are of the opinion that Amir should have been banned for life, many including his teammates have supported his inspiring comeback. On this occasion, we present 14 quotes by famous personalities from cricket fraternity, on who said what on Amir’s Test comeback.

1. Shahid Afridi on British media over his criticism on his comeback

Former Pakistani captain Shahid Afridi is probably the biggest supporter of Mohammad Amir since his comeback. Tired of British media’s constant targeting of Amir, Afridi couldn’t resist himself and said what is mentioned in the above image.

2. Mike Atherton reasons out why Amir should be given a second chance

Former English skipper Atherton has been very sympathetic towards Amir and has been saying regularly that this cricketer should be given a second chance. He also believes that going to jail is pretty harsh for Amir and said, “He made a bad mistake and he deserved some punishment, there is no getting away from that. Five years out of the game and going to jail is a pretty heavy punishment – I think it was a six-month sentence of which he served three.”

Atherton also explained the reason behind being sympathetic towards Amir and added, “But I do think there were some mitigating factors and that’s why I’ve had some sympathy for him and why I believe he deserves a second chance. The first circumstance is the nature of the sting. It’s important to understand that this was not a betting scam, there could be no bets made. This was a sting set up to show that players were corruptible. It is perfectly fair to argue, I think, that the newspaper was creating a crime and enticing people into crime, although the justification was that the journalist had been given a tip-off.”

Former England batsman David Lloyd did not agree with the decision by ICC over his comeback and clarifies that it is his personal opinion but one has to move on. “That happens to be my opinion, other people have theirs which I’m very relaxed about. The decision has been made, I don’t agree with it but life goes on.”

5. Michael Holding another supporter for Amir

Legendary Holding seems to be a believer in forgetting things, such as mistakes, especially when one has accepted and served his punishment. He also feels that Amir was pressurised for doing that crime in 2010 and explained, “I am happy to see that he is back. When the incident occurred, I think he was pressured into doing what he did and I don’t think it was naturally what he wanted to do.”

Former England women captain Charlotte Edwards hopes that from now onwards, Amir’s bowling will do the talking and said, “He is a fine cricketer, and let’s hope now that his cricket will do the talking. Although, hopefully he won’t be too successful against England.”

8. Wahab Riaz is another huge supporter of Amir wants him to do well to shut his critics mouth

Wahab feels that people will keep talking and criticising Amir but he believes that all these things won’t matter for him. He adds, “You cannot stop what people are going to say; it doesn’t matter what people think. We are not here to answer the people, we just want to play good cricket, a competitive series with England. They are a good team in their own home conditions, and our focus is on playing as well as we can at Lord’s.”

Right since Amir’s comeback, Kohli has been one of his biggest supporters. The Indian Test captain, who earlier gifted Amir a bat, added, I am quite happy seeing that he realised his fault and rectified it. ALSO READ: Gracious Virat Kohli and talented Mohammad Amir: Class performers and the mutual respect

Former Pakistan captain Imran Khan believes that Amir will get a positive response in England and appealed to those who are against him, “He has apologised to everyone so I appeal to all those who are opposing his return to stop their moves against him.”

Cook surely sounds pretty harsh with his stand over Amir’s comeback but he has also said that it’s time to concentrate on cricket rather than on his comeback. I just hope that we can concentrate on the cricket now. It s the big story about this Test match, but I thought the way both sides played in the UAE (last year) that the spirit between us was different to in the past, and I hope we can carry that on and talk about the cricket. READ MORE: Alastair Cook’s cautionary message to Mohammad Amir

12. The ‘Sultan of Swing’ Wasim Akram, gave his precious and positive advice to Amir

13. Another England cricketer against Amir’s comeback

It’s true that Kevin Pietersen is not happy with Amir’s comeback and is very firm with his stand over such crimes. “Any sportsman or woman caught match fixing, spot fixing or taking drugs should be banned for life.” ALSO READ: Now Kevin Pietersen joins the ‘ban Mohammad Amir’ bandwagon

14. Graeme Swann is another cricketer who has zero tolerance for ‘spot-fixing’

Swann is pretty harsh with his stand and believes there should be no place for corrupt individuals. “If you want to protect the integrity of the game, help cricket grow and inspire youngsters, there can be no place for corrupt players. You must have proper deterrents,” he adds. ALSO READ: Twitterati bash Graeme Swann for making unkind remarks about Mohammad Amir 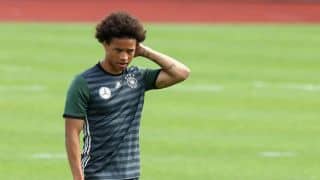 VIDEO: When Sania Mirza smacked Rajdeep Sardesai's "settle down" question for a six