Kaif, 34, looks at the mentoring role and training youngsters as a good opportunity and an interesting time in his career.

Former Indian cricketer Mohammad Kaif, hails from Uttar Pradesh, now plays for Andhra Pradesh (AP) in the Ranji Trophy has been given a new role of captaining and mentoring the AP team by Cricket Andhra.

According to The Hindu, Kaif said, “It’s not a new role for me. I did the same in Uttar Pradesh.” He has not played for India for years but that has not set him back, he reamined concentrated on bringing discipline and purpose in Uttar Pradesh (UP) cricket. “It was a great learning process. I had watched some of the greats of the game from close and was keen to share that experience with the players in UP. I am happy it worked with cricketers like Praveen Kumar, RP Singh, Suresh Raina and Piyush Chawla. We could build a very competitive side.”

Kaif added that the switch from UP to AP was not a decision made in hurry, “MSK Prasad had been saying for three years to come and play for Andhra. When I went I discovered fabulous cricket infrastructure. I saw a great opportunity to play with youngsters. I also needed a change. UP, was a settled side and I looked for a new challenge.”

Upon called a mentor, Kaif responded, “You may call me one but my job is to lead the side and ensure the boys do not suffer from lack of confidence and self belief. I organise things for them, introduce new ideas, discuss tactics. Basially I have to identify and raise a team that can go out and give its best. It is not tough. I have a superb friend and coach in Mukund Parmar. He understands cricket as good as anyone. The advantage here is that the management in Andhra is very professional. It gives priority to the needs of the players.”

Kaif shared his days in UP, “We had to do all things by ourselves. There was no trainer or video analyst. The captain and the coach (Rajinder Singh Hans) had to run the team. That experienced helped me a lot.” He spends more time in giving fielding lessons than batting and bowling, “”The players have to come out of their comfort zone and that comes from taking hard and tough catches during training. I have made them work on angles in fielding position. You can gain a fielder by covering more areas and that comes from tactical positioning.”

Kaif tells about the important things to do on the field, “I tell them that intent is important. The basics have to be strong. They have to communicate forcefully. Even if there is no run, the batsmen have to alert each other with a loud ‘No Run’. The batsmen have to know when to attack and defend. I have ensured the players will have security. I told some of them not to fear failure because they would get four matches to prove themselves. This helped in developing the trust factor.”

He can feel the positive changes in Andhra cricket, “The Andhra team has experienced changes that have brought in a positive attitude this season. Three outright victories in the Ranji Trophy have reflected on the team’s improvement. “It has been great because the players have learnt their lessons quickly. They communicate better. I have told them that each player is a captain, bowlers can ask for field placements, each player can react and give suggestions. The players open up more now. They have become chirpy. It is good for the team. We have begun to perform, begun to win.”

Kaif, 34, looks at the mentoring role and training youngsters as a good opportunity and an interesting time in his career, “I have benefited from my seniors and I feel it is important that I pass on the lessons to this generation. Experience and knowledge must always be shared. I am just doing that in my humble way.”

Veteran state player and official of Andhra cricket, M.S. Kumar said, “Andhra is experiencing a thrust that promises good results in the time to come. For long we had been at the receiving end. Things are changing now.”

He applauds the arrival of Kaif as captain and mentor of Andhra. “He commands respect. In short time, he has taught the team to win and have self belief. He brings in a lot of verve and character. Kaif is a man of steel,” he pats the cricketer with loads of encouragement. 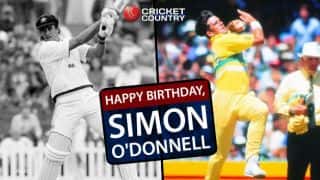 Simon O’Donnell: 12 facts about the multi-talented Australian all-rounder, who managed to defeat cancer