However, Dhoni didn't step back from praising the opposition.

Indian skipper MS Dhoni revealed that there was some “unrest” in the dressing room resulting from “lack of communication” with Virat Kohli before India’s batting collapse on Saturday in the second Test against Australia at Gabba.

India lost by four wickets and could only put up a target of 128 for Australia.

The drama was triggered by Shikhar Dhawan injuring his elbow during practice session but only revealed discomfort just before the play was to start. India had to send Kohli ahead of him but the batsman was informed of the change less than seven minutes before the visitors took the field.

However, Dhoni didn’t step back from praising the opposition.

“I think Mitchell [Johnson] batted really well. Once you get close to the new ball, the ball goes soft and the bowlers get tired. He played his shots and he was a little lucky too. Nothing went to the fielders and he was able to score. It was one of those days when nothing went right for us,” Dhoni said. 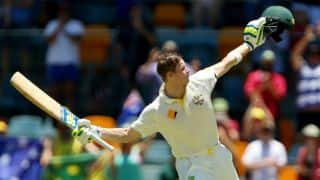