MS Dhoni’s biopic set to release on October 22, this year

MS Dhoni’s biopic set to release on October 22, this year

Mahendra Singh Dhoni’s biopic ‘MS Dhoni: The Untold Story’ will hit the theatres this year on October 22. The role of the highly appreciated Indian skipper will be played by actor Sushant Singh Rajput.

It is believed by few entertainment industry-based websites that the biopic on India’s most successful skipper in all formats will be releasing this year. The first look of Sushant Singh as MS Dhoni was revealed in December 2014 with a post on the Indian skipper’s fan club [msdhonifc] on social-networking platform Instagram. The actor is seen having long hair, much like Dhoni’s hairstyle until 2007.

As reported by Cricketcountry, Sushant Singh Rajput mainly accepted this role because of him being a cricket fan since childhood. The actor at one point of time thought of pursuing cricket as a career as Sushant and his sister have been national cricketers in their early days.

The production of the film was rumoured to be opposed by The Board of Control for Cricket in India (BCCI) but the Indian cricket administrators brushed aside saying that they have no objection to the film as it doesn’t affect the professional life of the cricketer.

Neeraj Pandey is directing this film, who is known for hits such as ‘A Wednesday‘ and ‘Special 26’. Report from IBN LIVE suggests that Suresh Raina’s role will be played by Ram Charan who is just making his second appearance in the Hindi celluloid. 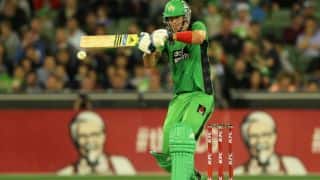