Harbhajan has been a part of the Mumbai Indians (MI) outfit since the league's inception and in 2013, the franchise bought Ponting in as the captain.

Ricky Ponting and Harbhajan Singh have quite a history. A war that began in 1998 with Harbhajan being pulled up by the match-referee for giving a verbal send-off to Ponting, continued till the end of the latter’s cricket career. Harbhajan had once made Ponting his bunny, but the latter too dominated whenever he got a chance. They had a lot to say to each other on the field and even off it they didn’t mind taking digs, till Indian Premier League (IPL) acted as the mending bridge.

Harbhajan has been a part of the Mumbai Indians (MI) outfit since the league’s inception and in 2013, the franchise bought Ponting in as the captain. It raised a lot of questions then on how the two would gel but MI went on to win the IPL that year and later Champions League (CLT20). Now as the MI coach, Ponting tasted another IPL win last week, a triumph where Harbhajan played a critical role.

In an interview with Espncricinfo last week, Ponting opened up about his relation with his once famous foe, Harbhajan.

“I think when I first came as captain in 2013 there was some animosity. It was up to both of us to stand up as men and break down that barrier. We wanted the best for the team and we did that. We had to put our differences behind us. At the end of the day, we are two really competitive people and I did not hold any grudges away from the field. Those sorts of battles are still going on with the modern players. I took a catch off his bowling in 2013 and we were embracing and hugging each other,” said Ponting.

The former Australian skipper then praised IPL and also spoke about his present camaraderie with the off-spinner saying he was the first one to wish him after his selection to Indian team.

Ponting added, “I think that is one of the great things about the IPL; an Aussie having great faith in a Kiwi and two great on field rivals working together as coach and number one spin bowler. I think I was the first one to congratulate him on his selection to the Indian test squad for Bangladesh. There is healthy respect between the two of us.” 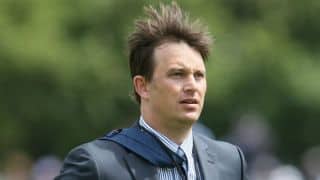 James Anderson and others who took 400 Test wickets