Sehwag has been clever with his tweets and birthday wishes to former and contemporary cricketers too.

Virender Sehwag was a sensation to watch on the field and has been doing a commendable job on micro-blogging site Twitter. Sehwag has been clever with his tweets and birthday wishes to former and contemporary cricketers too. He is certainly making the most of his fan base and on this occasion, he took up a very sensitive issue to create awareness among the masses. ALSO READ: How Virender Sehwag analysed the first session of Ind-WI Test at Antigua

Terrorism has hit the globe like an epidemic and it has now become a routine. Former Indian batsman VVS Laxman showed his concern for the Munich attacks on Friday with his tweet: READ MORE: Virender Sehwag trolls Umar Akmal; triggers India-Pakistan war on Twitter

Apart from the usual tweets, are we doing enough to counter this threat? Sehwag’s tweet is surely a food for thought. Terror seems to have spread everywhere and have been hogging headlines every now and then. The only solution to counter attack this problem is awareness and understanding among the people. The latest attack was witnessed in Munich where a gunman open fired and reportedly killed over 10 people. He was taken down by the forces but once again, it were the innocent lives put to rest. Sehwag tweeted a picture, which speaks about the common problem in a crafty way.

Hopefully, terrorism comes to an end to ensure peace and harmony. It is also time for us to rise beyond the pretention of being concerned and take this issue seriously. 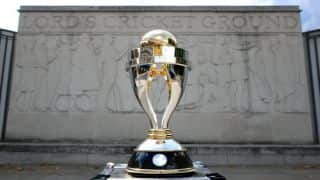