Pakistan will play two One-Day Internationals (ODIs) against New Zealand on Saturday at Wellington and on Tuesday at Napier.

It’s World Cup bonanza for spectators in New Zealand and they will hope it rains sixes during the tournament as The Tui, the official beer company of the BLACKCAPS (New Zealand cricket team) has announced lucrative incentives for the super fielders.

As reported by the Pakistan Observer, Steven Smith, the Senior Communication Advisor of Tui Brewery said, “During the Pakistan games, which start on Saturday, the Tui Catch a Million prize, if the fans catch a six one-handed cleanly they will win a money-can’t-buy experience for four people to the ICC Cricket World Cup 2015 final in Melbourne”.

“If a fan catches a six struck into the crowd on-handed cleanly they will win a trip to Melbourne (Australia) – for four people – to go to the Cricket World Cup final. The prize includes flights from NZ to Melbourne, accommodation, tickets to a corporate box for the CWC final”.

Pakistan will play two One-Day Internationals (ODIs) against New Zealand on Saturday at Wellington and on Tuesday at Napier.

In 2014, the company had awarded NZ$ 100,000 prize money to two spectators for grabbing the super catch.

Smith added the conditions, “The prize is only for New Zealand residents during series against Pakistan. And During the Cricket World Cup, at all the 23 matches played in New Zealand, fans which catch a six one-handed cleanly will win a share of prize money depending on how the Blackcaps perform in the tournament”. 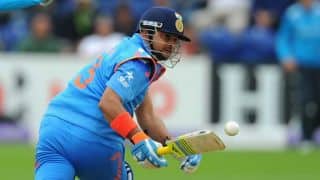