Reports suggest that the board had given the three-month contracts without even consulting the players.

Pakistan cricketers touring New Zealand for two One-Day International (ODI) series, have declined to sign the three-month extended contract given to them by the Pakistan Cricket Board (PCB).

According to Indian Express, the Pakistan players after a meeting in New Zealand refused to sign the extended contracts and informed the touring manager Naved Akram Cheema that they would first speak with the Chairman of the PCB, Shaharyar Khan before taking a step.

“The players led by captain Misbah-ul-Haq and other seniors are not happy with the three-month extended contracts because they believe it deprives them of pay increases for a three-month period,” a source was quoted as saying by Indian Express.

Reports suggest that the board had given the three-month contracts without even consulting the players. The PCB gave three-month extension contracts to all the players after the existing contract of the Pakistan players expired on December 31st, 2014.

The Board added the contracts of players, Sohail Khan and Haris Sohail to the central contracts list; the duo recently selected for the World Cup squad starting from February 14th, 2015.

The players are on the opinion that the existing contracts were made during the tenure of former PCB chairman Najam Sethi and even then they had conveyed their reservations to the board regarding some clauses in their contracts. “Now the players want the board to give them one-year contract for 2015, backdated from January 1 with increased pay scales and revised clauses,” reported Indian Express.

The dispute over the signing of the contracts has surfaced just before the onset of the ICC Cricket World Cup. Recently, PCB had issued show cause notices to Shahid Afridi and some other players for taking part in an advertisement before the board’s permission as the report also said that said some players were not comfortable with certain clauses in their contracts pertaining to commercial endorsements and individual sponsorships. 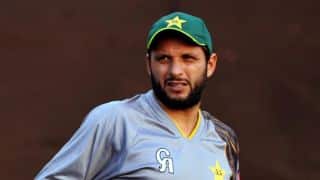 January 26: Cricketers from India and Australia who were born on this special day