Shaharyar Khan refused to rule out the possibility of a home series against India later this year.

The Pakistan Cricket Board (PCB) chief Shaharyar Khan refused to rule out the possibility of a home series against India later this year.

While replying to media reports that the BCCI was looking forward to host a home series in December, Shaharyar was quoted as saying by CricketCountry, “They have not spoken to us about it officially but we have also heard about it. But as things stand now it is stated clearly in the Memorandum of Understanding (MOU) between the two boards that the first series of the six series bilateral package will be played in the UAE this December,”

“The venue of the first series which will be our ‘home’ series, is described as neutral venue and UAE in the MOU,” he added. 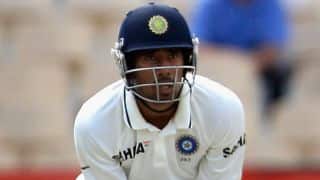 Wriddhiman Saha: No scope for relaxing despite MS Dhoni's retirement