In an attempt to feature in one of the most entertaining leagues, several Pakistani players called it a day from international cricket on Wednesday

Masters Cricket League (MCL) is all set to commence on January 28 in Dubai and will feature the greats and legends of the yesteryears. In an attempt to feature in one of the most entertaining leagues, several Pakistani players called it a day from international cricket on Wednesday after the Pakistan Cricket Board (PCB) agreed to issue them NOCs to feature in the tournament.

Former Pakistan players Rana Naved, Humayun Farhat and Muhammad Khalil caught up with PCB’s COO Subhan Ahmad and tendered their retirements in writing in order to open the gates for the league. This was followed by Yasir Hameed, who too retired from international cricket an hour later.

The circumstances emerged after many Pakistani players including Mohammad Yousuf, Abdul Razzaq, Imran Farhat, Taufiq Umar, Naved, Khalil, and Farhat went to the board for NOCs. The PCB in a statement revealed that it will only grant NOCs to cricketers who submit their written irrevocable resignation from international cricket on behalf of Pakistan. PCB was quoted in a report from PTI saying, “”Such cricketers will, however, remain eligible to play in domestic cricket as per rules.”

As the first edition of Pakistan Super League (PSL) is also scheduled to be played in UAE from February, the PCB in its statement also said that MCL is a competition for the PSL.

The release also said, “”It may be noted that the Masters Champions League (MCL) comprising retired cricketers is scheduled to take place in UAE next month, during the same dates and at the same venues as the Pakistan Super League (PSL). For this reason, the Pakistan Cricket Board (PCB) has formulated a Policy to govern the participation of Pakistani Players in the MCL. 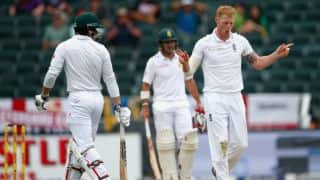