Sohail is reportedly 'traumatised' and is unable to train after complaining of a supernatural presence at his Rydges Latimer, Christchurch hotel room

Pakistani player Haris Sohail is believed to have seen a ghost in a hotel in New Zealand where the Pakistan cricket team is currently staying. Pakistan is scheduled to play two One-Day Internationals (ODI) against New Zealand, ahead of the 2015 Cricket World Cup. Sohail is reportedly ‘traumatised’ and is unable to train after complaining of a supernatural presence at his Rydges Latimer, Christchurch hotel room.

As reported by The New Zealand Herald, the 26-year-old Sohail woke up in the night and was terrified, that there was a supernatural presence in his room. He has been ‘freaked out’, with the incident.

The incident took place during the weekend and it is believed that Sohail was pushed by a ghost while he was asleep. He immediately called up the team management and by the time the they came to see him, he had developed a high fever. The team management convinced the hotel management to change Sohail’s room.

A spokesman for Rydges Latimer Christchurch hotel commented that there was ‘no active ghost.’

“It’s hard to believe. They (Pakistan management) told me it was only a nightmare. I spoke with a team physiotherapist and other people on the team. He (Sohail) didn’t come to me but they wanted him to move rooms. He’s been sleeping in another room for about two night now.”

It is said that the hotel was built after the February 22, 2011 earthquake which claimed 115 lives when the multi-storey Canterbury Television building collapsed just 100m away and has not received any similar complaints in the past.

Sohail didn’t play during Pakistan’s first warm-up match on Sunday at Lincoln outside Christchurch playing against New Zealand President XI, which they lost. Since the incident, Sohail has been unable to practice with the team. He hasn’t trained for two days now.

Sohail did play for Pakistan in the second warm-up match against the New Zealand President XI at Lincoln on Tuesday. He batted at number 4 but failed to make a big contribution with the bat as got 6 off 25 deliveries.

Last year, English cricket bowler Stuart Broad claimed to have experienced similar supernatural interactions. Broad moved rooms at The Langham hotel in London after being convinced there were ghosts his room. 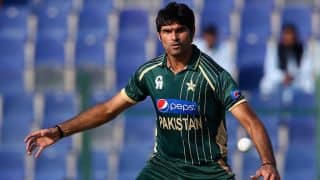