The slow left-arm spinner will play in Hyderabad's encounter against Himachal Pradesh in the Ranji Trophy after being cleared to bowl.

Indian spinner Pragyan Ojha’s action has been cleared byThe Board of Control for Cricket in India (BCCI). He is eligible to play in Hyderabad’s next Ranji Trophy encounter against Himachal Pradesh starting in Hyderabad on Friday.

The left-arm spinner said to Press Trust of India, “Yes, I got the clearance from the BCCI this afternoon. I have received a mail stating that my action has been cleared and I am eligible to start playing competitive cricket. I will be playing in Hyderabad’s Ranji Trophy match tomorrow (Friday). It has been an emotionally turbulent phase for me. Hopefully, it is over now.”

When asked as to what exactly was the technical problem, Ojha explained: “There was a bit of problem that developed with my body momentum at the time of release. Since I was playing non-stop, I didn’t realise when it crept into my system. The team of experts worked with me in Chennai helped me get rid of the problem. The change that I now have is that of a straightened run-up to the crease.”

Ojha was elated to be back on the field, “Yes, I am happy to be playing but I belong somewhere else! I belong in that Indian team and that’s my aim. To get my place back in the Test side.”

Ojha was banned from bowling in competitive cricket and sent for correction of his bowling action last December. He has been a regular player in India’s home Test matches until last year and has taken 113 wickets in 24 Test matches.

“It was a very tough period emotionally for me and my family. But I would like to thank the BCCI and the Chennai testing centre for their support. I would like to thank specialist coaches Diwakar Vasu (former Tamil Nadu Ranji player) and Venkat Ramanna who worked with me during the last one month,” said Ojha.

During his hour of crisis, Ojha did get a lot of support from his teammates. “(VVS) Laxman bhai was always in touch and had encouraging words. Anil (Kumble) bhai also from time to time encouraged me. Rohit (Sharma) and Ajinkya (Rahane) would call up at times and inquired about the progress,” said Ojha.

For him it was a ‘phase’, which is finally over and there are only brighter days ahead of him.

“I am a religious man and had complete faith in the Almighty. I had firm belief that I can’t be kept away from something that I love the most in this world. My mother would keep telling me that this is just a phase and it will be over very soon,” an emotional Ojha said.

The Indian Premier League (IPL) auction is around the corner but Ojha is not bothered about whether he would get a team or not. “I am not really bothered about IPL auctions. My entire focus is getting my place back in the Indian team,” he concluded. 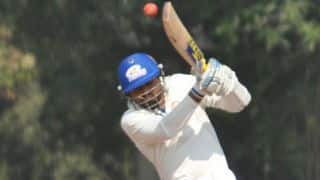 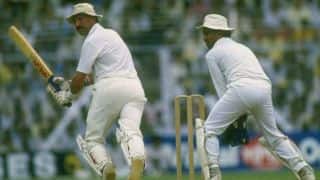