The teenager from Kalyan created history and remained unbeaten on 1009.

A total of 1,000 career runs is considered to be a milestone and imagine someone scoring that many runs in a single innings! Mumbai school cricketer Pranav Dhanawade, on Tuesday, became the first batsman to score 1,000 runs in an innings for KC Gandhi School against Arya Gurukul during the HT Bhandari Cup inter-school cricket tournament organised by the Mumbai Cricket Association (MCA) at Kalyan.

The teenager from Kalyan created history. Earlier on Monday, Dhanawade had broken the earlier record of highest score in school cricket, as he went past Prithvi Shaw’s record of 546 made in the Giles Shield in 2014-15. His school declared the innings at 1465 with him unbeaten on 1009.

Dhanwade is only 15 years-old and his father is an auto-driver. Speaking to Indian Express on Monday, his father Prashant said, “It a unfulfilled dream. I want my son to become a great cricketer. He has proved that he has the talent today. Cricket is not an easy sport and expensive too. I spent extra hours driving an autorickshaw in order to afford the cricket gear for my son.

Twitterati hailed the young kid and we bring you some of the tweets.

To me Pranav Dhanawade’s knock will shut up an Indian parents as well. Can’t see a scope for them to compare with Sharmaji’s son. CRICKBC (@crickBC) January 5, 2016

If Scoring 10 Hundreds in a Career is considered Fantastic, Think Again, Pranav Dhanawade has done it in a Single Match!! Ethir Katchi (@sudhanks) January 5, 2016

@rahulroushan Rajdeep’s First Question : You trained Pranav Dhanawade that he could make 1000 run, why not 2002?? 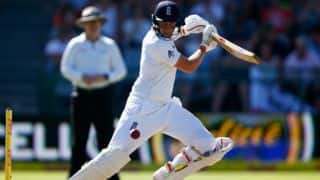