Rohit unlikely to play against England and the final, if India reaches in the final

Indian opener Rohit Sharma is all set to miss the Friday’s clash against England on January 30th, 2015 in the on-going Tri-series in Australia. The Indian team management has decided not to risk him in the ‘virtual semi-final’ as well as the final match, if India reaches to the final.

Rohit had suffered from a hamstring injury during the opening encounter where he scored a brilliant 138 against Australia. According to The Indian Express, it is said, “Chances of Rohit playing in the tri-series even if India reaches final is next to nil. He is recovering but the Indian team management does not want to risk a key player with the World Cup starting in less than three weeks.”

The report added, “The physio said after having a look at the MRI reports that Rohit needed a week’s rest and after that could start training. With Shikhar Dhawan completely out of form, they do not want to risk Rohit in this tournament as they have a World Cup to play. The February 8 and 10 warm-up games against Australia and Afghanistan will serve as Rohit’s match-fitness test.” 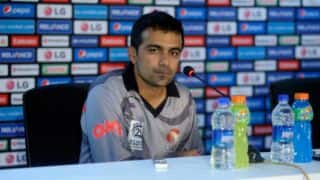