The second innings is about giving back to people as much as I can.

If Sachin Tendulkar has a zillion fans and worshippers, he has also attracted many of who passionately criticize him, to the point of calling him self-centred. Now that Tendulkar has his playing career behind him, critics are wondering what the incredibly rich man will do for the society.

The answer comes from the maestro himself: “The first innings was all about excitement, being competitive and chasing my dreams on the field. The second innings is about giving back to people as much as I can, and in return to expect satisfaction. I have been with an NGO called Apnalaya for 20 years but it was difficult to be there when I was playing. Now I have promised them more direct involvement. I am also donating parts of the proceeds from this book to ending malnutrition in children and clean water for the underprivileged. The expectations from me continue. And I realise that in this innings I do not have a bat in my hand. On my 40th birthday , I developed an initiative with a team to light up villages. We are pursuing this idea very passionately through the Spreading Happiness India Foundation. I know it sounds silly and I can’t do it on my own. The whole nation has to participate. The Swachh Bharat Abhiyan is also something I’m passionate about.” 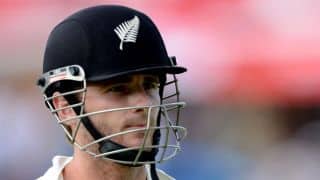 Pakistan vs New Zealand 2014: Kane Williamson could be the trump card for the visitors