Sachin Tendulkar once batted with tissues in his underwear during a World Cup match to arrest ‘accidental leaks’!

The incident happened during the Super Sixes phase of the ICC World Cup 2003 against Sri Lanka.

Cricket legend Sachin Tendulkar has revealed in his autobiography, ‘Playing It My Way’ that he once batted for 160 minutes with tissue papers in his underwear!

The incident happened during the Super Sixes phase of the ICC World Cup 2003 against Sri Lanka at the Wanderers in Johannesburg. Tendulkar had an upset stomach but still went on to score a match-winning 97. The condition of his stomach was such that he had to frequently visit the dressing room during the drink’s breaks.

Tendulkar writes: “Here I am a bit embarrassed to reveal a very personal secret relating to the Sri Lanka match. On the eve of the match I had a bad stomach and was feeling dehydrated. This happened because I had not yet fully recovered from the cramp I had suffered while playing Pakistan and as a result had had a lot of isotonic drinks.”

Just nine days back, Tendulkar missed another hundred against Pakistan in a Group match at Centurion. His match-winning knock of 98 is remembered as one of his best innings.

Coming to his knock against Sri Lanka, Tendulkar added, “I somehow scored 97, but batting with stomach cramps wasn’t a pleasant experience. I was pushing myself to the limits of endurance and in the end I was glad that the effort paid off.”

It paid off indeed, as Tendulkar’s 97, was the highest score of the match and India went on to win the encounter by a massive 183 runs. Less than two weeks later, India, however weren’t so lucky as they lost the World Cup finals to Australia. 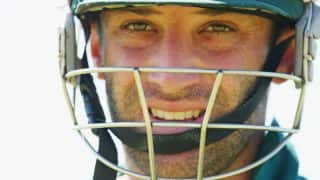 Indians vs Cricket Australia XI: Match ends in a draw