Since few days, reports have emerged which suggests Sara to make her debut in Bollywood opposite actor Shahid Kapoor.

Batting legend Sachin Tendulkar, who recently turned 42, has kept himself busy in promotional events after achieving almost everything in his two decades cricketing career. With Sachin attaining numerous heights in his career, one just cannot keep his children Sara and Arjun quite from their respective acts.

Since few days, reports have emerged which suggests Sara to make her debut in Bollywood opposite actor Shahid Kapoor. After the reports got surfaced, it looks like the Master Blaster has become disappointed and so is her daughter.

Sachin took the micro-blogging site Twitter and rubbished the rumours of her daughter Sara linking to bollywood.

My daughter Sara is enjoying her academic pursuits. Annoyed at all the baseless speculation about her joining films.

The 18-year old at present is a student of Dhirubhai Ambani International School and has often seen with her mother Anjali Tendulkar in many events. 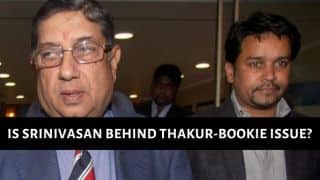