Cricket legend Sachin Tendulkar will participate in the state-level inauguration of 'Vimukthi', an awareness mission against liquor and narcotic abuse, on November 20.

Thiruvananthapuram: Cricket legend Sachin Tendulkar will participate in the state-level inauguration of ‘Vimukthi’, an awareness mission against liquor and narcotic abuse, on November 20. The mission, envisaged to promote abstinence and create comprehensive awareness against drug abuse, is an ambitious initiative by the CPI(M)-led LDF government in the state. State Excise Minister TP Ramakrishnan on Monday told the Assembly that Tendulkar had already agreed to be a part of the drive, as per request of the state government. “The state-level inauguration of the government’s anti-liquor and narcotic campaign will be held on November 20. Sachin Tendulkar, who had already agreed to be part of the drive, will participate in the inaugural function,” he said. Full Cricket Scorecard: India vs England 1st Test at Rajkot

The cricket maestro’s service would be utilised effectively to promote the campaign, he said while replying to a calling attention by C Divakaran (CPI) on the need to strengthen awareness programmes to achieve abstinence and check narcotic abuse. Detailing the functioning of ‘Vimukthi’ mission, the minister said mass awareness programmes would be held against consumption of liquor, narcotic substance and nicotine and its allied products under the drive. It would be implemented with the support of various stakeholders, including women Self Help Group Kudumbashree, volunteers of student cadet cop and national service scheme and various youth and women outfits, he said. Sachin Tendulkar wishes Mitchell Johnson on his 35th birthday

“A governing body, chaired by the Chief Minister and an Executive Committee led by the Excise Minister have already been set up to coordinate initiatives of the mission.Vimukthi will have committees at various levels,” Ramakrishnan said. To check drug abuse among youngsters, the government has already set up ‘anti-narcotic clubs’ in over 700 colleges and a number of schools across the state, he said.

Complaint boxes to submit complaints against drug abuse had been set up in over 1,000 schools so far, the minister added. The Kerala government had discussed with Tendulkar about the state’s anti-narcotic campaign when he met Chief Minister Pinarayi Vijayan at the Secretariat here in June. Vijayan had then said that the cricket legend had given consent to use his name to strengthen the campaign against liquor and drug abuse in the state. 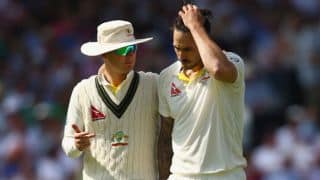