Saqlain feels that Pakistan will be totally different team when they face India in their opening match of World Cup.

Despite being on the losing side against India in all the World Cup matches played so far, former off-spinner Saqlain Mushtaq believes Pakistan can still beat India in the upcoming World Cup.

Saqlain feels that Pakistan will be totally different team when they face India in their opening match of World Cup.

As reported by Dawn, Saqlain added, “Although Pakistan have never won a World Cup match against India, their approach should be positive. Pakistan players are fighters who are unwilling to give up easily. Most of our cricketers have learnt the game at the grass-roots level and many haven’t attended any academy but they have that killer instinct to help them become positive cricketer.”

The inventor of doosra praised the current squad for World Cup and warned India to be careful of Pakistan bowlers. He further mentioned his concerns on Saeed Ajmal absence and said, “It will be very important in Ajmal’s absence to have a proper bowling attack. And if the management could have come up with a solid plan, his absence wouldn’t have hurt Pakistan much.”

Speaking on the Indian bowling attack, he said, “India’s batting is very strong and they will have to rely a lot on their batsmen. But if they want to reach the knock-out stage, their bowlers will have to be disciplined. The batsmen will certainly give them an edge but bowlers need to perform as well.” MS Dhoni seemed to be running out of ideas, says Sunil Gavaskar 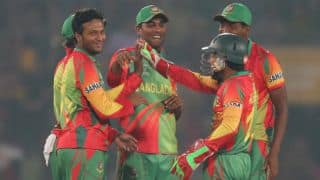