Sarfaraz is considered to be India's future batting sensation but his fielding skills has let him down and finally he has taken fitness seriously.

Sarfaraz Khan made the headlines last year when he was bought by Royal Challengers Bangalore (RCB) in the Indian Premier League (IPL). He became the youngest cricketer to feature in this tournament but what made him more famous was his eating habits and his plump physique. His appetite for food compelled West Indies opener Chris Gayle to confer the nickname ‘Panda’.

This year too, Gayle and other teammates of RCB kept calling him ‘Panda’ and there was a time when he was dropped from the side because of his fitness. RCB captain Virat Kohli revealed in an interview by saying, “He (Sarfaraz) understands the areas in which he needs to work on as far as the fitness and fielding is concerned. You can’t afford to have too many guys in the field who are not up to the mark with their fielding because the outfield here is lightning quick.” Also Read: Why Virat Kohli dropped Chris Gayle, Sarfaraz Khan from RCB’s first XI

Sarfaraz is considered to be India’s future batting sensation but his fielding skills has let him down and finally he has taken fitness seriously. As reported by Mid-Day, Sarfaraz will soon be leaving from India to England to work on his fitness and said, “I am trying hard to match Virat sir’s expectations. Basu sir has given me a fitness and training schedule. I will work accordingly in England where I will try and reduce my fat levels, keep fit and become stronger.” 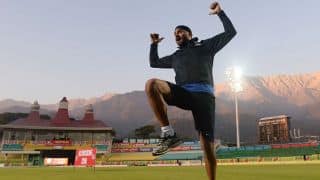