Shahid Afridi turned down the offer to participate in the seventh season of the show saying "Biwi ko nahin nachana hai!"

For almost 20-years he has remained the poster-boy of Pakistan cricket. A heartthrob, Shahid Afridi’s posters are a common scene on the walls of young girl’s room. His popularity transcends borders and he is equally a popular celebrity in India as well.

As reported by Mumbai Mirror, Afridi turned down the offer to participate in the seventh season of the show saying “Biwi ko nahin nachana hai!”

The makers of the dance reality show were eager on getting the cricketer on board and were close to finalising the deal when it hit him that the show’s format involved couples dancing to win the title.

According to the report, a source said, “Shahid was ready for a solo act but when told that his wife and he would have to groove together, he was taken aback.”

“He categorically told us that he doesn’t want the whole world to see his wife dancing. He turned down the offer saying, ‘Biwi ko nahin nachana hai!’ Nobody could argue with that as it’s a personal call,” the source added.

The disappointed channel is now looking for a replacement with the reality show starting in April. Earlier, Pakistani cricketer Shoaib Malik and his Indian wife Sania Mirza burned the dance floor in the last season of the show.

Afridi has shared images of his daughters in the past but has never done so of his wife. His wife has been seen mostly in burqa and now way would the conservative Pathan would have allowed his begum to dance in reality show! 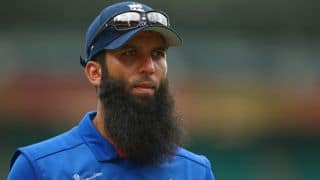