Although Australia lost the Ashes but Clarke ended his career on a good note as they had a consolation win in the fifth and the final Test.

Australia’s iconic cricketer Michael Clarke along with teammate Chris Rogers retired from international cricket on Sunday after their team demolished England at The Oval. Although Australia lost the Ashes but Clarke ended his career on a good note as they had a consolation win in the fifth and the final Test. In his enticing Test career, Clarke amassed 8643 runs at an attractive average of 49.10.

Legendary Leg-spinner Shane Warne, who is also a good mate of Clarke, hailed him for his tremendous cricketing sense and abilities. It was a mixed moment for the Aussies as they might have won the battle but lost the war. Warne went on to compare Clarke with one of Australia’s greatest captains, Allan Border.

As quoted in AFP, Warne said, “Allan Border was the most meticulous in preparation and I think Michael Clarke rivals Allan Border for his preparation in leading up to a game.”

The leg-spinner, who was also a teammate of Clarke in Hampshire, further added, “He was representing the family and Australian cricket, so to be able to handle that when it was one of his best mates, like his brother I thought the way he handled that stuff was unbelievable.”

Further in his tribute to one of the most elegant batmen in contemporary cricket, Warne said, “Clarke will be remembered as a fleet-footed batsman that was a fantastic player of spinners, was great to watch, was easy on the eye, was a flamboyant player. The way he got his runs was pretty great to watch, and the way he did it was with a bit of flair and imagination.” 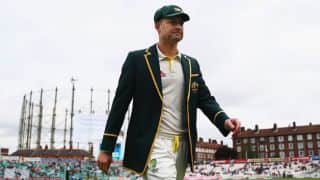