The tri-series final will be played on February 1st, 2015 at Perth

Watson was sidelined with a tight hamstring for Friday’s match against England which the hosts won. He also missed the washed out game against India in Sydney.

In a report from IBN Live, Watson said, “It’s nothing too serious, but more so a precaution just to make sure it settles down over this week and be ready to go again by Sunday in Perth. If not then, the practice matches leading into the World Cup.”

The tri-series final will be played on February 1st, 2015 at Perth. India and England will battle it out in the ‘virtual semi-final’ on January 30th as the winner of the match goes Perth to take on Australia.

Australia and New Zealand are hosting the ICC World cup this year with Australia slated to play the warm-up matches against India and the United Arab Emirates.

With Michael Clarke’s injury concerns and Watson doubtful for tri-series finals, Australia looks to be in jeopardy ahead of the World cup. 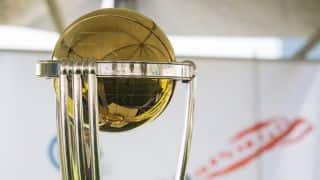