King Khan for a laugh said he is the "packaging" of the team and him and his kids are the cheerleaders.

It was the opening match between the Kolkata Knight Riders (KKR) and Mumbai Indians (MI) of the eighth edition of the Indian Premiere League (IPL), where the megastar and co-owner of KKR, Shah Rukh Khan (SRK) was present in the city of joy with his children-Aryan, Suhana and AbRam.

In a joyous mood after his team’s victory over MI by seven wickets, SRK said he is “extremely happy” that his kids enjoy the matches and understand the value of two phases of the game- winning and losing.

“I want my children to enjoy sports this game and I love IPL. It’s very personal to me so I feel extremely happy that my kids come and understand the value of losing and winning. Tonight (Wednesday) was winning it had to be all there were here,” said SRK was quoted in a report from IANS.

SRK’s son AbRam, youngest of the lot, marked his first IPL game and was seen running around the pitch post the game He even attempted to hug KKR skipper Gautam Gambhir after the comprehensive victory.

“You can’t come with three kids and let them down. Tonight is important because after a long time I am together with them. I will come for all the matches,” SRK said.

King Khan for a laugh said he is the “packaging” of the team and him and his kids are the cheerleaders.

“I would honestly like to take the whole responsibility for it but I would be lying. I stand by them. There is Gautam and the rest of the boys and Venky sir and Jai bhai. They spend so much time that they have completely made sure that I am now just the packaging of the team and when I become boring I bring my children to the game. I just come and cheer. I am the cheerleader of the losing team and now we have three cheerleaders,” he said.

Known for his emotional connection with the city of Kolkata, SRK opined this break was also an introduction of AbRam to the “maximum love” that the city of joy has to offer.

“The fact that I have got my under two year old son here is to introduce him to the maximum love I have got anywhere in the world while failing repeatedly and I want him to know the people that love you, love you unconditionally, so I thank Kolkata for unconditional love,” he said. 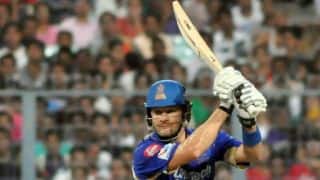