Steve Smith's day out with Baseball in Boston

Steve Smith's day out with Baseball in Boston

Steve Smith got an opportunity to meet the Boston s all-star second baseman Dustin Pedroia and tried his hand with the baseball bat.

Australian skipper Steve Smith is surely a multifaceted sportsman. There isn’t much that this young man cannot do. Averaging over 40 in ODIs and more than 60 in Tests, it turns out that he is a decent baseballer too.

The Aussie captain is in the United States to visit New Balance’s headquarters in Boston, where he had the opportunity to throw the ceremonial first pitch for the Red Sox s game against the Los Angeles Angels at Fenway Park. Guess what? He did a good job! READ MORE: Kevin Pietersen, David Warner join hands to troll Steve Smith on Twitter

The 27-year-old got an opportunity to meet the Boston s all-star second baseman Dustin Pedroia and tried his hand with the baseball bat. He seemed to have impressed Pedroia by connecting sweetly with a number of pitches. However, he was not able to clear Fenway Park’s famous “Green Monster” – an 11.33m wall in left field. ALSO READ: Steve Smith: 11 facts about the Australian run-machine

It took me a little while to get into it, I was hitting the ball a bit more up, a little bit more like how a cricket bat should go. But I think you ve got to hit it a bit more down , to get the backspin on the ball to get some more distance. Unfortunately, I couldn t get one over the Green Monster , said Smith. WATCH the video in CA website

In 2014, Kyly Clarke, wife of former Australian skipper Michael Clarke, threw the first pitch at St Louis’ Busch Stadium ahead of a match against the Chicago Cubs.

A memory for a lifetime! Check it out, me hitting up Busch Stadium for last nights first pitch & hubby @MClarke catching @rawlingssg @cardinals #greattimes 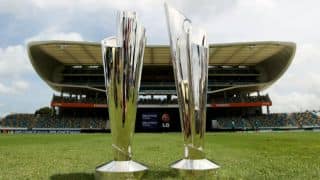