While captain Virat Kohli was rightly congratulated for this historic feat, several fans from the Twitter space also congratulated his girlfriend and Bollywood actor Anushka Sharma for the same.

From Prime Minister Narendra Modi to cricket legend Sachin Tendulkar, all wished Team India on its win in Sri Lanka. Not only India beat them at home after 22 long years but also the young side won an overseas series for the first time in four years.

While captain Virat Kohli was rightly congratulated for this historic feat, several fans from the Twitter space also congratulated his girlfriend and Bollywood actor Anushka Sharma for the same. Weird, isn’t it? Not quite. Not long back, after India’s defeat in the World Cup 2015 semi-final against Australia, many blamed Anushka’s presence at Sydney as one of the reasons for Kohli’s failure and India’s loss.

The kind of abuses that were hurled at Anushka on Twitter was absurd and it hurt all sane minds and of course Kohli and the celebrity in question. Tit-for-tat, many on the Twitter space felt that if the actress can get the criticisms, then why not the accolades!

Quite rightly, Huffington Post came up with a story on the same and presented some of the best tweets. Here are some:

Hey babe @anushkasharma ..Well done for making India & Virat win! Logic na..u ought to get the bouquets not just the damn brickbats! Hugs

Why people don’t praise @AnushkaSharma now those who blamed her for #ViratKohli‘s failure ? #INDvsSL

@AnushkaSharma @imVkohli #INDvsSL behind every successful man, there’s a woman!

If we lose then Anushka Sharma & now we have won then Ishant Sharma.Waah…That’s unfair…

Congrats to Anushka Sharma for the series win. Since she gets blamed when her boyfriend loses, it’s only fair she be applauded for this win.

And Congratulations to @AnushkaSharma. If Indians troll you when India is losing then they should thank you when we win. @imVkohli @BCCI

Why no one is congratulating @AnushkaSharma for maiden test series win of @imVkohli? Well, she is blamed every time when Kohli plays badly. 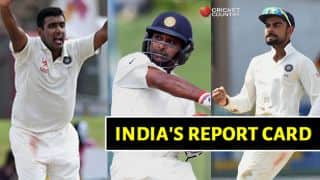