Mark Boucher has urged game s governing body ICC to attach the bails to the stumps so that they don t injure any cricketer.

When there is a discussion on the greatest wicketkeepers of all time, Mark Boucher s name is an integral part of it. The former South African keeper, who has most dismissals to his name with a combined tally of 999 in Tests, ODIs and T20Is, had a tragic end to his career when a flying bail hit his eye and effectively ended his career.

The incident happened during a warm-up game against Somerset on the 2012 England tour after which Boucher was forced to retire. And now, the 39-year old player has urged game s governing body ICC to attach the bails to the stumps so that they don t injure any cricketer. He has suggested that the bails should be attached to the stumps to avoid them from flying in the air after being hit by a ball. Also Read: 9 little known facts about Mark Boucher

“I had not worn the helmet but even if I had, it would not have avoided the accident. Helmets are designed for balls, not bails,” a report in mid-day quoted Boucher as saying. The former cricketer further added, “My recommendation would be to somehow attach the bails to the stumps, by a light string. This way, the bails will not fly and cause damage to any player .

The ICC had on Sunday maintained its stand that the wearing of helmets in international cricket should not be mandatory. But if a batsman decides to wear a helmet, then it must comply with the new British Standard (BS) – BS7928:2013. Boucher agreed with the ICC on this and said, “I would strongly recommend everyone to wear a helmet, but making it compulsory would not be fair on players who prefer not to wear one . Hope the ICC is listening and does something about it so that budding careers do not come to a sad and abrupt end due to such tragedies on field. Also Read: Mark Boucher invites Sachin Tendulkar to South Africa for ‘rhino work’ 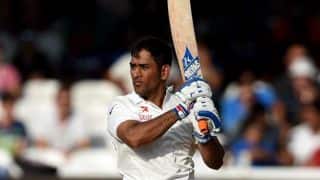