They have stitched numerous match-wining partnerships at the top and complement each other well.

Indian Test openers Shikhar Dhawan and Murali Vijay are a sensation to watch on the field in whites. They have stitched numerous match-winning partnerships at the top and complement each other well. Both are currently in the Caribbean ahead of the Test series against West Indies and on this occasion Dhawan and Vijay have taken their camaraderie off the field and to a different height. ALSO READ: Video: Wasim Akram, Sean Paul and Ali Zafar in Dubsmash action

Dhawan and Vijay did a commendable on Dubsmash as the former lip-synced the famous dialogue of WWE wrestler The Rock whereas the latter filled the shoes of opponent. The expression and body language of the duo was noteworthy and worth an applause. Dhawan took to his official Instagram account where he posted a video and wrote, “Fun moments with my bro @mvj8 . Do anythng but dont make me angry!! Lol.” ALSO READ: VIDEO: Warner as The Godfather, Shikhar as Gabbar, Yuvraj as Taxi Driver and other hilarious Dubsmash from SRH camp

The Rock is a renowned wrestler in the world of wrestling and loved across the globe. Many cricketers in the past have tried their hand at Dubsmash and the result was just fabulous. Both, Dhawan and Vijay have been drafted into the Test side and are now preparing in the Caribbean for the Test series. The tour comprises of four Tests with the first one commencing from July 21. 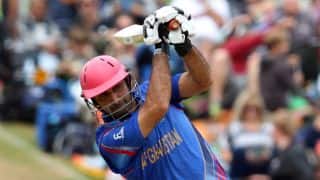