Kohli said he was inspired by pop icon Justin Timberlake.

Seen as one of the fashionable cricketer in the country, Kohli’s style statement was compared with David Beckham and Cristiano Ronaldo by Reddy.

Speaking to Economic Times Panache, Reddy said, “We have been working with Virat for the last two years for merchandise and memorabilia. So we have a great working relation with him. We thought why don’t we extend this association to something bigger.”

“Really glad and happy that I am able to do something that I always wanted to do. This idea of launching own clothing line came and we were thinking of names. One thing that people associated with me in first look or first instance is being wrong. They picture me as someone who is wrong and eventually that becomes right after certain point of time. So that was the whole plan and then we decided to spell wrong in a wrong way,” he said.

According to India Today, Kohli said he was inspired by pop icon Justin Timberlake. 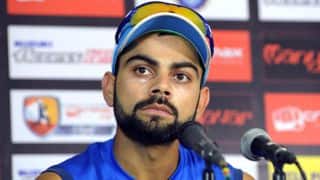 Virat Kohli: Indian team has focused on cricket; not distracted by off-field events