Virat Kohli will be leading India in the first Test against Australia.

With regular skipper, Mahendra Singh Dhoni, out of action due to injury, Virat Kohli will be leading India in the first Test against Australia at Brisbane. Speaking to the media, after reaching Australia, Kohli spoke about his passion for leadership.

He also emphasized on being mentally strong. “I think coming to Australia and playing, it’s more about the mindset rather than getting used to the conditions, because pace and bounce is something which you can get used to. But unless you’re mentally there, there’s no point of any sort of practice,” said Kohli.

Kohli believes that his team is mentally strong and have the ability to tackle the hostile conditions that Australia presents. “It’s all about mentally being there. If you can visualise being in that battle and being on top, I think you’re going to be able to go out there and execute it. I think the guys in our team have the ability to do it. It’s all about being mentally present,” Kohli concluded. 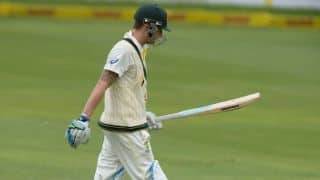