Perhaps the former Indian cricketer loves the kind of aggression and positive attitude that Kohli has brought in to the Test side.

Virat Kohli has been on a roll, and so is Virender Sehwag. Perhaps the former Indian cricketer loves the kind of aggression and positive attitude that Kohli has brought in to the Test side, which the he has been leading since mid 2015. Kohli has lost only one Test yet against Sri Lanka at Galle and he has been dominating every single opposition that India have faced since then. Under Kohli, India registered their first series win in Sri Lanka in 22 long years, and then returned home to hammer South Africa by 3-0 in a four-Test series with one Test being washed out. FULL CRICKET SCORECARD: India vs England, 3rd Test at Mohali

Kohli then took his Test side to the Caribbean, and without much fuss, the lowly West Indies were trumped 2-0. West Indies did show some fight, but Kohli s India was truly rampant. The Indian captain had set the tone with his double century. Kohli s score of 200 at North Sound, Antigua, was the first occasion when an Indian Test captain had struck a double century playing overseas. Deservingly, India returned home with the series in their bag and looked set to dominate in the upcoming India Cricket season, which had 13 Tests lined up. ALSO READ: Virat Kohli reveals how hard it was for him to maintain the strict fitness routine

New Zealand did not prove to be much of a challenge, and despite his struggles for a major part of the series, Kohli guided India to a 3-0 whitewash of the Kiwis. Kohli might have not made many runs in the first two Tests, but he had a special gift for Indore on their Test debut. Kohli scored 211 in the final Test, proving that there are hardly any batsmen in world cricket who are as dominating as him.

The England series was always going to be challenging, and Kohli has been at his best once again. He played a match-saving innings in the dying moments of the first Test, and powered India to a big win in the second with his scores of 167 and 81 in the second Test. Understandably, Sehwag is floored with Kohli s feats.

Speaking at the Goregaon Sports Club during the launch of their cricket league s second season, Sehwag said, I think Virat Kohli should change his name to baadal (cloud). Upar aasmaan me baadal chaaye rehte hain, aur neeche maidaan pe Virat Kohli (The way clouds light up the sky above us, Virat Kohli lights up the cricket field).

Well, Sehwag is not wrong in saying that. 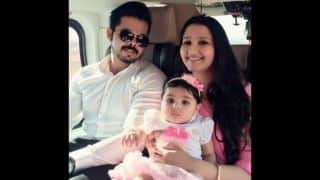