Soon a day will come when Virat Kohli scoring hundreds will stop making news. Hasn’t it become a regular occurrence? Cricket has rarely seen such consistent players but this definitely is something newsworthy. On Friday, Kohli not only scored his first double ton in Test cricket but also his first in First-Class cricket eclipsing his previous best of 197. Kohli struck 24 boundaries and to reach the magic mark, he flicked towards the mid-wicket region.

Kohli, batting on 143 overnight, reached to the milestone before lunch on Day 2. The fifth wicket partnership in excess of 150 between Kohli and Ravichandran Ashwin put India in a commanding position. Ashwin too brought up his seventh fifty in Test cricket and looked set for a century. Also Read: Virat Kohli, milestones and bond with West Indies

With plenty of time remaining in the Test, India are in a dominant position as they look set to notch up a win.

Kohli shares an insane fan following and Twitter exploded with congratulatory tweets the moment Indian captain reached 200. We bring out some of the best tweets.

@imVkohli run machine. The outstanding ability of a man who will be one of the greats.

Congratulations @imVkohli on your 1st double hundred in Test Cricket. many more to come. #Greatknock

Virat Kohli leads yet again by example. Many congrats on the first double ton. The first of many more to follow @BCCI #WIvIND #Antigua Anjum Chopra (@chopraanjum) July 22, 2016

It was only a matter of time..hopefully it’s first of many. #200 well played pic.twitter.com/nlKbbbzx6T Aakash Chopra (@cricketaakash) July 22, 2016

The first double has taken time coming but there is little doubt there are many more on the way #Kohli Harsha Bhogle (@bhogleharsha) July 22, 2016

Oh Antigua, see what you’ve missed?What a pity that this came in front of empty stands..Oh well, first of many! You da man @imVkohli #IndvWI jatin sapru (@jatinsapru) July 22, 2016

Forget the records. For sheer gorgeousness of shots this innings is one to remember #WIvIND @imVkohli pic.twitter.com/qvApuqCwRY Anand Vasu (@anandvasu) July 22, 2016

And there in anil kumble’s camera capturing the moment. The indian coach can do a memory book at the end of his stint. Of serious value. Boria Majumdar (@BoriaMajumdar) July 22, 2016 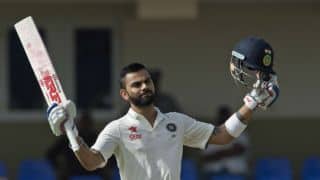