Professor Mooshie rates his students for the recently-concluded Border-Gavaskar Trophy.

Another overseas series defeat and the disciplinarian Professor Mooshie is livid over the Indian performances. Here’s how he has rated his students for the recently-concluded Border-Gavaskar Trophy.

9/10 Virat Kohli: Fresh thoughts, fresh energies, but a known approach that we expected off him. Kohli announced himself as a Test cricketer and captain. He showed no mercy to both half volleys and verbal volleys. I’m livid with his behaviour and wanted to send him to the Principal’s office. However, I let it pass as he batted exceptionally well. He led a clueless bunch and passed with distinction.

Vijay: Solid at the top. I give him full marks for his disciplined approach. In the first innings at Sydney, he tried to be flashy and paid the price, but learned from his mistake. At Adelaide, he looked to be a better bowler than regular spinner Karn Sharma. Good boy, Vijay!

Rahane: Fluent, classy and effective. Had luck with decisions been in his favour, the runs tally would have looked more impressive. Nevertheless, it was for him, Vijay and Kohli that India could salvage some pride. I tell the students that one must bat according to the situation. Rahane implemented the same at Sydney. He changed gears from top to first to help India save the Test. He is another good boy. As a professor, I rate him highly.

Shami: Did just enough to pass. He bowls four good balls and then the fifth used to be a rank loose one. Not the way one goes about in Test cricket. He needs extra classes, but at least he got the wickets which others didn’t. I’m happy at the way he displayed grit with the bat.

Rahul: Who the hell plays like that on Test debut? Even Virender Sehwag didn’t! I was furious with his shot selections and would have handed him a one-year Test exile. But, at Sydney, he got another chance. He capitailised on the opportunity with a classy hundred. That saved him secure the pass marks.

Bhuvneshwar: Kohli could bowl at the same pace Bhuvneshwar did. Why play if not 100%? Was not a good sight to see the ‘keeper standing up to an alleged fast bowler. However, he deserves accolades for the way he batted, something the regular batsmen should learn!

Ashwin: Again decent with the bat and disciplined, but as a frontline spinner you can’t average 49 with the ball. Averaging close to 57 as a bowler in overseas Tests. Not acceptable at all. Till very recently, we had a pair named Harbhajan Singh and Anil Kumble. How we miss them!

Dhawan: He was disappointing to say the least. There were glimpses of classy drives in midst of awkward tailender-like misses. Verdict: Demotion

Pujara: Conferred with the title ‘the next Rahul Dravid’, Pujara failed in his second consecutive overseas tour. Needs to get back in class and re-work his way to glory. I rate him highly. He should have played ahead of Raina in Sydney.

Dhoni: Uninspiring with the bat and once again listless in the two Tests he led. He shocked everyone by deciding to hang up his boots from Test cricket. While many have criticised him for leaving the team mid-way, I think he made a brave and right decision. Salute to this special cricketer, one of the greatest Indian wicket-keeper batsmen of all-time.

Ishant: Good in patches, but if India’s main bowler averages 48 with the ball, you can’t expect anything good from the department. First ruling: Go to a saloon; look like a gentleman. Let the performances translate and then the style can follow.

Saha: He doesn’t let me sleep as he still gives nightmares of the stroke that the keeper played in the second innings of Adelaide Test to get out. Usually fantastic behind the stumps, he wasn’t half as good as he usually is. His batting was below par.

Rohit: Enough motivations, enough of chances. What do you do with a student who scores A+ in all the mock tests and keeps failing in board exams? Baffling, isn’t it? I’m confused how to analyse this bright student who fails repeatedly. Perhaps, a psychologist can!

Umesh: Scary, the way he bowled. If he continues the same way in the World Cup, India can book their return flights post group stage. Umesh went for 45 runs in his three overs in second innings at Sydney, and that’s the most expensive by any bowler who has bowled three or more overs in Test cricket.

Karn: Poor him. I will introduce this new chapter in India cricket holy book “Karn in Lion’s Den”. Just didn’t look a bowler of Test class. Blame the selectors and management for picking up.

1/10 Varun Aaron: All pace, no brains makes Aaron a dull bowler. Only pace doesn’t work, it needs to be backed up with direction. You can sledge, but only when you can back that up with performance. He needs some off time and counselling sessions.

0 Suresh Raina: What do you do with a student who submits a blank paper? Raina didn’t deserve a Test berth in first place. Verdict: Shouldn’t play Test cricket – ever.

9.5/10 Steve Smith: Best in the class, deserved full marks. Only flaw was that he delayed declaration at Melbourne which denied Australia a Test win. A total of 769 runs, that’s astounding. Great days seem to be ahead for Australia under a new inspiring leader.

Warner: In Test cricket, for a side to excel you need exceptional superheroes like Virender Sehwag. Warner is following those steps and has done remarkably. He scores big, scores them quick and the bowlers then come out with plenty of time to bowl out the opposition. However, he needs to be disciplined.

Clarke: Led the emotional first Test with distinction. Set the tone of the series with a brilliant hundred. Respect for captain courageous for playing the Test for his deceased team-mate Phil Hughes, despite an injury but unfortunately it only aggravated as the Test proceeded, ensuring he doesn’t play any further part in the series. Full marks for enforcing a sporting declaration. The class needs exceptional students like him and professor wishes him a speedy recovery.

7.5/10 Chris Rogers: No hype around him. Rogers just went out quietly and did his job, and did it with precision. A class needs self-less beings like him and Australia benefitted from his 417 runs.

7/10 Josh Hazlewood: Brilliant debut and kept bowling well throughout. I like this new kid and see a bright shining future ahead. Good to see someone backing up his skills with intelligence.

Lyon: His efforts ensured that Australia were one-up in Adelaide. Not easy to excel against an Indian side that play spin well but Lyon, with 23 wicket, did a commendable job. He did the basics right that is taught in the class i.e. bowling outside off stump. Maybe that’s something Ashwin can learn from him.

Johnson: Bowled well in patches but in certain spells looked threatening. He was nowhere near his Ashes feats but did contribute with bat too. Overall, he did well enough to pick up 13 wickets. However he needs to be spanked for his on-field spats with Kohli, which were on borderline of translating into a fist fight.

Shaun Marsh: He did well enough to erase his torrid memories of the 2011-12 series against India. He was a steady force in the middle-order and chipped in with crucial partnerships that helped his team put-on big scores.

Harris: For years, he has been the mainstay of Australian bowling. Quietly he has gone to do his job. He kept things tight, picked up wickets and did enough with the bat to trouble Indian bowlers late down the order.

Mitchell Marsh: He batted selflessly for team’s cause and played his role quiet well. He could have picked up more wickets but did bowl tightly. He got injured and his series had a premature end. Players like him, add a lot of value to the side.

Burns: He didn’t have an exciting debut, but in the last Test, he scored two fifties, both of which came in his team’s cause. Burns looks another exciting prospect for Australia.

5/10 Mitchell Starc: Shane Warne called him too ‘soft’ in Brisbane, but Starc came back well in Sydney, perhaps too ‘hard’, giving Vijay a send-off. He got caned by the ICC, but Starc was an improved bowler in Sydney. He also batted decently. Overall, he managed to pass the test.

Haddin: With his experience, more was expected out of him. He did keep well, but his batting was below par. His safe wicket-keeping and some useful knocks down the order sees him secure the pass marks.

Watson: He was disappointing with the bat and didn’t add much to the side. Later on, he did get two fifties and bowled well in spells. He averaged close to 30 with the bat and 49 with the ball. He is one of Australia’s stars and much was expected out of him. However ‘the Watson factor’ as a threat kept looming over and that worked in the side’s favour.

2/10 Peter Siddle: Played the first Test and was disappointing. A poor outing ensured that he wouldn’t be picked up for rest of the matches. Siddle should look to pull his socks up as the competition thickens with a class of good fast bowlers lining up for Australia selection.

Professor Mooshie is a strict disciplinarian and appreciates cricket played copy book style. Lover of the sport traditional style, he is a fierce critic, and will lambast you if the mistakes are repeated but if you meet the expectations, he is lenient with marks. Beware of the ill-tempered, gold hearted professor and buck up as you may just earn his ire. 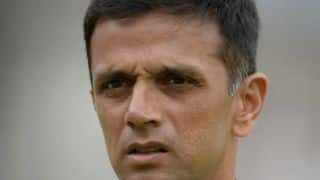