The elegant right-handed batsman soaked in the pressure and came out with flying colours in the first Test at Antigua where he smashed a scintillating double ton.

Prior to the ongoing Test series between India and West Indies in the Caribbean, there were talks about Virat Kohli‘s ability to replicate his insane form against the red ball. The elegant right-handed batsman soaked in the pressure and came out with flying colours in the first Test at Antigua where he smashed a scintillating double ton. Also Read: Virat Kohli, milestones and bond with West Indies

Kohli looked astute and placed his innings sensibly to become the first Indian skipper to have scored a double ton on foreign land. Kohli earned accolades for his determination and the world has heaped words of praise to the Indian skipper. Also Read: Virat Kohli smashes his maiden double hundred: Twitter goes berserk

West Indian legend Viv Richards on this occasion opened up on Kohli’s knock and the words are just pleasing for a Kohli fan. In an interview with bcci.tv, Richards said, “I think It was a magnificent hundred. To score a double hundred at Sir Vivian Richards Cricket Ground is a formidable task in terms of what he has achieved. I remember when I met him at the hotel (before the Test series) I did say good luck, but I didn’t believe he would take it this far in terms of achieving a double. As a batsman myself, it was very pleasing to see and even though it was against the West Indies, I do appreciate seeing class and his was a classy knock. Also Read: MS Dhoni believes India has a better pool of bowlers at present

Richards also spoke about thing that Kohli apart from his imminent peers. He said, “The thing that sets him apart is his will. He certainly has a magnificent appetite to perform. His talent is as good as any. Sometimes, we have seen talent fall by the wayside. Kohli has certainly maximized his talent in my opinion and taken it to the next level because of the fact of believing and the will he has and the desire to succeed.”

India are in a commanding position at the moment after posting 566 in the first innings while West Indies are one down for 31 at stumps on Day 2. 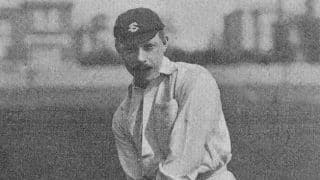